Amendment 5 would require a two-thirds vote of each chamber of the Florida State Legislature to enact new taxes or fees or increase existing ones. As of 2018, the state legislature can enact new taxes or fees or increase existing ones, except the corporate income tax, through a simple majority vote in each chamber. Voters approved the amendment for the corporate income tax, with a three-fifths vote requirement to increase the tax above 5.0 percent, in 1971. The passage of Amendment 5 would mean that a tax or fee could not be increased along a party-line vote, unless a single party controlled 27 seats in the state Senate and 80 seats in the state House. In 2018, Republicans controlled a majority of seats, but less than two-thirds of seats, in each chamber.

Amendment 5 would also require that a bill enacting a new or increasing an existing tax or fee contain no other subject.

"Prohibits the legislature from imposing, authorizing, or raising a state tax or fee except through legislation approved by a two-thirds vote of each house of the legislature in a bill containing no other subject. This proposal does not authorize a state tax or fee otherwise prohibited by the Constitution and does not apply to fees or taxes imposed or authorized to be imposed by a county, municipality, school board, or special district."

During FAC's Annual Conference in June, the FAC Board of Directors voted to oppose Amendment 5. 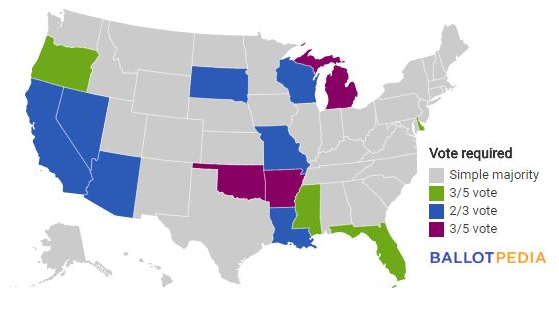 In Arkansas, Florida, Michigan, and Wisconsin, the vote requirements apply only to certain types of taxes, not all taxes.

As of 2018, the Florida State Legislature needs a three-fifths vote (60.00 percent) of each chamber to increase the corporate income tax above 5.0 percent. The vote requirement was passed in 1971, when voters approved a constitutional amendment to allow the state to enact a corporate income tax. The current corporate income tax rate is 5.5 percent. The state legislature increased the tax rate to 5.5 percent in 1984, requiring a three-fifths vote in each chamber. In 1984, Democrats had a trifecta in state government, meaning Democrats controlled both chambers of the state legislature and governor's office.

Should it be harder for legislators to raise taxes? Voters get to decide in November

Three Democrats joined Republicans Monday to put a constitutional amendment on the November ballot that would ask voters to require a two-thirds majority of both the House and Senate before they can raise any tax or fee in the future.

Florida Republicans are pursuing a plan to make it harder for lawmakers to raise taxes in the state, adding new hurdles for Democrats hoping to enact bold social programs such as "Medicare for all" and more robust education spending. For Republicans, the effort aims to ensure conservative policies govern the state even if they are voted out of office — a very real possibility ahead of midterms featuring tough polling and an unpopular president.